Lists of  pages links from old site. Not in any particular order, roughly in time sequence.

An Event: Wee intro to common good fund And. How can our communities be reconnected to our commons. What kind of imagination, collaborations, practical ideas and strategies can we build into what we already have around us to raise the profile and to take back the commons. The Commons and the Collective Imagination – gathering- Kinning Park Complex Sunday 26th May 2:00 – 5:00 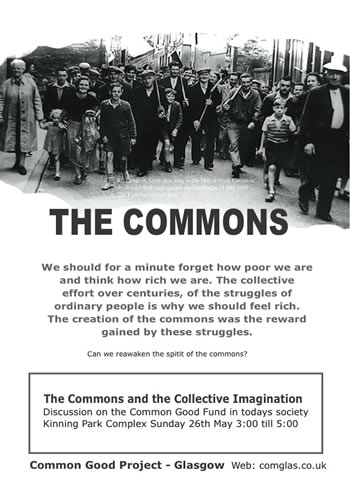 A vision for the Future of Allotments Andy Whightman

North Kelvin Meadows at City Chambers George Square fighting for what should be happening in all of our communities.

Spirit of Revolt
Looking after our own history is the only way to stop it being commodified or as another cut in government spending. The Spirit of Revolt archive being set up at the Mitchell library is a grassroots initiative that will help to keep our history in public hands. The archive will have much to record on the last 30 years of struggle against neoliberalism in this city and beyond.

Building institutions Farmhouse project
Many of our institutions of learning and socialising have been swept away with deindustrialisation. Rebuilding social spaces and protecting the ones we have against aggressive privatisation will be an imperative in the 21st century – along with the reclaiming of the commons. The Farmhouse and garden are part of our commons.

Sturgeon in disability row over 2014 Games [Herald]
DEPUTY First Minister Nicola Sturgeon is being targeted by protesters who want the controversial “fit-for-work” benefits test company Atos dropped as a sponsor of the Glasgow 2014 Commonwealth Games.

ATOS unfit for 2014…… Games
A new campaign against Olympic worldwide partner Atos is set to be launched with the aim of getting Glasgow 2014 to drop them as a sponsor of the Commonwealth Games.

Dear Green Place from James Urquhart on Vimeo.
A short film about North Kelvin Meadow – a green and wild community space in Glasgow that is under threat from property developers. If you think nature is more important than a high-end new-build then please help the campaign to save the meadow by sharing this film, by signing the online petition and by lodging an official objection to the planning application here: northkelvinmeadow.com

The Big “R” is coming your way

Common sense, comes from the idea that if enough of us believes something through mass experience – that is, when the vast majority of folk agree about something that usually comes out as being what is termed, common sense.

The everyday problems of people

Activism and the dissociation from popular struggles
Many of the campaigns concerning, anti war, anti capitalism, occupy, ordinary people can feel threatening and antagonised by. While this work can be important it doesn’t mean much to a lot of people. How the activist starts to think less about incomprehensible rhetoric and meaningless discourse and starts to relate to the folk we will need to carry off major social change, is a constant problem in movement building. If our campaigning, groups, ideas and movements don’t assist with everyday problems of people, is there any reason for them to be successful? Critical Connections at the Reshuffle.

Glasgow neoliberalism has a history
Neoliberal, Glasgow, is about some people taking things off of a lot of other people, in order to make money, then trying to convince those who have been robbed, that they should love it. (01:29Min)

Oral heritage under threat from pan loaf taliban.
Edinburgh University’s cunning new idea of destroying this archive – the largest archive of folk literature and folk history the Scots and Gaelic languages, an archive that took 60 years to build and was meant to safeguard these cultural artefacts for Scotland. (This maybe being resolved but why would it come up in the first place?) School of Scottish Studies