I was discussing with a younger person the title of Stuart Christies book, “Granny made me an Anarchist”. She was describing how groovy the title was. I haven’t read the book, [yet] but I started to reflecting on what Christie, may have meant or implied by the title of his book.

When I left school in the early 60s I started a job as an apprentice motorbike mechanic. (Bike, open road, freedom.) One day a new mechanic started at the place I worked. He had a BSA Shooting star (500cc all alloy barrels).

On the front of the bike was a white fairing with a sticker across the windscreen, stating, “Free Stuart Christie” At first I thought Stuart Christie, was a road racing star or something. When I questioned the new mechanic, about who this person was, it lead to many lunch and tea-time break discussions, on the ideas and principals, of anarchy.

Up to then I was only interested in mechanical things. Through my discussions with Tam, I was about fifteen, he was around eighteen or twenty, I realised we had more in common than just the internal combustion engine.

I don’t know what the significance of Christies book title was , But the meaning of the title to me is in lots of ways reflective of the political attitude of the working class, at the time. I was fifteen and had just escaped the authoritarian nightmare of school. I didn’t discuss politics and do not recollect getting much insight at school on the subject. I was not politically active in any sense. I talked about motorbikes and whether the Rolling Stones were better than the Beatles.

I may not have been politically active but I was politicised in the communal sense. Had I been working in a big factory and there was strike action, I would have known what I should do. If there was someone in my community getting treated badly for whatever I would have known where I stood. The east end of Glasgow was a pretty tough area at the time but a lot of that was idiots, fighting other idiots. And even the idiots had some respect for tradition.

I do not ever remember my parents being what you would call politically active. I remember when I was about eight or something. There was a scare in the neighbourhood by the usual, “can’t see nothing good in anything” source, that a black person was going to move into the street.

This was the east end of Glasgow, in the 50s. I don’t think I had even seen a black person in the flesh. What was I to think, as this neighbour proceeded to fill my mother in with the details of the dread that was about to happen, (which didn’t) oblivious of course to the fact that there was a child present.

This was my first encounter with racism and my first lesson in how to deal with it, as my mother expressed in a straight forward, mind your own business fashion, that she didn’t care what colour people were, her only concern was that they were good neighbour’s.

My parents were straight forward working class people, who educated their kids by instilling in them the idea of a common bond with people, through fairness and honesty. My political development was not guided by a political doctrine, but by a combination of family, community and kinship. Not a blood thicker than water relationship, or one of competition, but one rooted in a genuine concern that one person was as important as the next.

I am not suggesting here that I have lived up to the example my parents set. I also believe my generation should shoulder a lot of the responsibility for the deterioration over the last thirty years or so, of the gains that were made through sacrifice and working class struggle. However that’s yet another story.

But there is a question to ask of today’s grannies, who are the generation I have just mentioned. Would your grannie today make you an anarchist.

Granny Made me an Anarchist
Yes it is very possible back then, granny would have made you an anarchist, mainly I think, because she would be aware of a history of struggle and of how achievements were made to refer to. And she would be well aware that, only the efforts of her own class and their actions, could ever change her circumstances, in any positive sense.

It is this very infrastructure and historical perspective that the market, capitalist, machine, has practically been allowed to destroyed over the last few generations, in particular at the grass roots level. The jobs, the de politicisation of ordinary citizens, the television, the lottery dream, the crass bewilderment that these techniques produce, has become – grass roots culture.

But what the machine can not destroy is the tap roots. That is the force lying just beneath the surface, that represents the achievements of working class organisation and struggle, its history. It is the reenergising force and empowerment that this history could engender, that could helping to rebuild a collective vision of a workers movement.

This is why the right wing attacks it [working class history] so forcefully, as myth and fantasy. For elites know more than the workers do themselves the capabilities and danger to themselves of an organised mass movement and to that movements recall to the past achievements and successes of working class endeavour.

In other words an examination by workers of historical facts of what works and what doesn’t is anathema to our leaders, which is why they are constantly attempting to rewrite our past, and demean workers achievements.

The effects of indoctrination to the slave mentality of – know your place and accept the status quo – can be illustrated in ordinary conversation almost anywhere. Where the acceptance to almost abstract ideas posing as normality is mind boggling.
The eradication of the notion of self enlightenment through critical study and examination of – even the most recent events – is the perfect outcome of this indoctrination process and is in evidence throughout our society.
It is easy to test the situation: Suggest to someone in employment, that – workers in this day and age of automation, should be working not an eight hour, but a four hour day. They may, as a first option look at you as if you are daft

British Leyland (car plant) workers during the work-ins of the 70s, produced more in a 3 day week without management, than they were doing in five days before the work-ins – under management.

In some of the poorest areas of the world, workers have sustained industry long after management and owners have given up the ghost. Like the Zapatistas, in Mexico and many other examples, workers have proved time and again, when management is jettisoned production improves,

These are not things you will read in the business sections of newspapers, to inspire worker cooperation. What a eight year old could have figured out, regarding the three day week at British Leyland, seemed to escape most of the media at the time, who consistently blamed the workers – not bad management – for the closure of the plant.

More than usual, in conversation, the waged slave will actually start of by defending the position that she or he is in.
“But you wouldn’t get enough done.” [working four hours a day] “How could I live and feed my family on half my pay.” 1

These are the answers, not of the thinking individual but the result of an indoctrination process which does its best to smother critical thought and a basic sense of fairness, purpose and expectation.
“I would rather work eight hours a day at anything, than be unemployed”. A failure to realize the creation of unemployment, is to encourage this type of thinking. “But you wouldn’t get enough done.” A failure to recognise that most people are employed producing useless tat or services we could very well do without. Workers expectations through lack of organisation have been driven down so far, that camaraderie and mutual support, have been replaced by fear and gratefulness.
It is called normal living being divorced from your family for the best part of the day in useless education, which will go a long way to inducing the above tendencies of the working person – or in work that will dull the senses and reduce family interaction, to the penance of homework and then as reward the oblivion of television.

The masters tools will never dismantle the masters house
In order to build cohesion cooperation and creativity in the workplace, we need to discard the masters tools and pick up our own. We need to shape confidence, principals and trust in our co workers and neigbours. We will not change the world over night, but we are well capable of making change happen – and our history can illuminate the way – if we take the same time to study it as our bosses do.

For you would see what they do, that community interaction and collective discussion, is a powerful tool of change and very dangerous in the hands of those who seek change and therefore, to be avoided at all costs. The bosses also understand in the exploitation of the workers, they must stand as a single unit against our demands. Reason would suggest, in order to realise our demands, we need to organise as a single unit against them.

A trade union is the act of making or becoming a single unit. Joining a union may not solve all of our social problems, but joining a union would help to galvinise an attack against the root of the most insidious of the worlds ills – profit before people. If we start by joining a workers union, (not a bosses union) perhaps then, we could go on to understand the wider implications and misery, our compliance to wage slavery upholds. 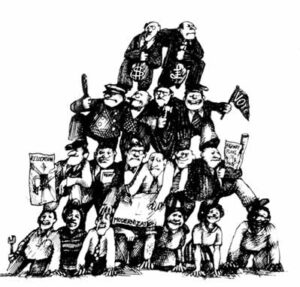 What happens when we all stand up (From old poster)

Industrial Workers of the World (I W W)