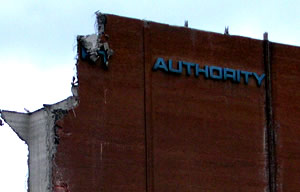 Herald Fri. June 25 1999. From an article including an interview with Council leader Charles Gordon. Discussing a £500m leisure complex on the Clyde about to begin with the ripping down of the old granary on the river to build a leisure complex “along the lines of one in San Francisco.” This of course, it is stated, will be “adapted to take account of Glasgow’s climate.” Speculating about the likely occupiers of the 900 houses, Mr Gordon said: “I don’t care if they are yuppies or middle class professionals.they will be most welcome in this city”. He said their council tax payments would be used to tackle social exclusion and added : “this is going to be a win-win situation for the whole city.we are talking about mega stuff.””The development would also include a “futuristic” motor retail park.” The article says nothing about how the money will be spent tackling social exclusion. But you can bet a project such as this will cause some. The article goes on to describe space and employment. “There would be 400,000sq ft of office space including a 130,000sq ft headquarters building for an as-yet-unidentified national or international occupant”.

The estimate of 3000 jobs is based on the total number who would be employed on the 80 acre site. Clydeport said this figure was based on “detailed research”. One wonders how the detailed research got around the unidentified occupant. However these are mere details, the share prices are rising nicely with the following reassuring quotes from our council leader taken from the same article by the Heralds Ian McConnell: “He also indicated that Clyde port and Bank of Scotland should have no difficulty obtaining planning permission.””It would be improper for me to comment on the planning detail” he said. However he immediately added, “in terms of the outline (proposals), there are no planning policy impediments to this development concept.”

This is how Glaswegian’s are informed about £500m development with lots of figures, nice pictures, and promises of jobs, plenty of contradictions and half-baked plans. What is always mentioned in these articles is what is good for business profits and shares. What is very rarely mentioned is how it will affect ordinary people and their environment socially, physically and financially when large tracts of public land in the city are privatized. For instance when the Town Hall becomes the Shopping Mall freedom of movement and freedom of speech are impeded. And ‘failed’ projects leaves the tax payer with the bill for business incentives, in the form of business tax relief and very little in the form of local amenities for their investment, apart from another shop in which to spend money.