Many great writers have written about the city. Drawn by the city’s impulsive, diverse uniqueness. Lewis Mumford’s social and visionary essays. Henry Miller’s seething autobiographical portraits of city life. Dickens’ tales of London sears the mind of adult and child alike. These writers write about people, for it is people who make cities, and cities are a history of their people.

The Glasgow of my childhood opened my eyes to the diversity of place, people, adventure and exploration. Cities are steeped in moments of enlightenment and historical event. Cities define community and a sense of personal place. Cities also breed conviviality and project a visual reference to our historical past through architecture.
To create or preserve a city for people, the people need to engage with the city, claim it as their own and take an interest in its future

The loss of diversity

I have wandered the lanes and streets of central Glasgow most of my life and watched as the secret places I have photographed and enjoyed disappear one by one. It seems to be the habit of Glasgow city planners to desecrate acres of indigenous city architecture (much of it designed by Scots) or leave it to rot and let it fall down on its own accord, usually only to be replaced by the generic red brick and wood chip, floored housing stock or more recently luxury flats, entertainment and retail saturation. These developments are executed with no, or very little, concern for community welfare or historical considerations

“There used to be one but it’s gone”

What is to become of our city’s history unless we take care to protect it and understand its meaning and value? For instance there is less and less to attract the city dweller to the centre of town apart from shopping and commercial entertainment. Our institutions have all but disappeared. Post offices, banks, municipal buildings, churches, libraries, soapbox debate, small diverse businesses, markets, places that give a sense of meaning and belonging to the ordinary citizen. These institutions must be preserved or replaced for it is such places that bring structure to the city’s sense of community 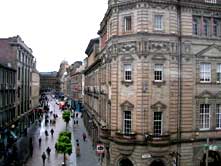 “This is the city and I am one of its citizens. Whatever interests the rest interests me, politics, wars, markets, newspapers, schools, the mayor and councils, banks, tariffs, steamships, factories, stocks, stores, real estate and personal estate.” Walt Whitman

So it is important in the development of our cities that the above institutions are preserved and / or replaced. But by what? That is the question. I cherish old buildings for what they represent and their place in our visual history not just because they are old buildings. I have a reasonable knowledge and enjoyment of contemporary buildings, materials, design and use. I know what a good design feels like and so do most people. Modern architecture is not something that was born yesterday. It has a history of invention and usefulness. Unfortunately modern architecture in the pejorative sense is produced only for the eye, not the user and serves to most extents the developer rather than the community. Communities should be a force for change rather than the victims of change. And the onus of proof should be on the changers to prove the change is worthy

CITY STROLLS I hope will be a format for such topics with architecture as a main theme and architecture both old and new in the service of the community. And of course the only way to understand urban development and our city is to get out walking in the streets with our senses alert. Discuss, criticize and most importantly, use and celebrate what our city could and has to offer.