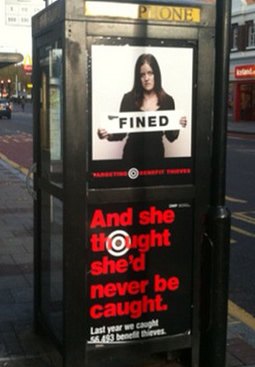 Interesting the Government would spend millions of pounds on advertising hoarding’s, television programming and advertising, radio over the last 15 or so years to expose welfare fraud and practically nothing on exposing business fraud and tax evasion. If you are poor it is a crime, if you are rich it is “business as usual”

“Welfare and warfare receive very different treatment from politicians and the media. In January 1996 a report revealed a £636 million loss of taxpayers’ money paid in income support to fraudulent claimants. The following day this became a major news item on national TV, radio and the press with politicians and pressure groups interviewed at length. The £645 million over-spent on military projects that were not completed on time received a few paragraphs in the broadsheet press. Both reports came from the National Audit Office.” (The Armour Plated Ostrich)
When it comes to swindling, “dole cheats” aren’t the biggest drain on the UK economy:

British businesses also receive billions in welfare handouts – from the Department for Trade and Industry. The DTI is basically a corporate dole office. Source for tax welfare figures: Citizens for Tax Justice