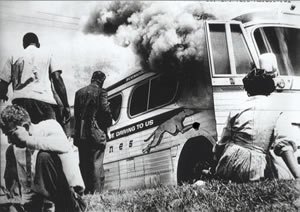 Around the late 60s in the US and elsewhere there was what was known as “an outbreak of democracy” By the 70s the revolution was being dismantled by a right wing effort to break the solidarity that was achieved during the golden period when the idea of institutional change was looking possible. There wasn’t as such, the anti-war movement; environmental movement, woman’s liberation movement. For a time there was “the movement” If you were for one, you were for them all. Examples of the solidarity of this movement could see 200 white middle class students from New York, spend, at there own cost, their summer break in the deep south of the US in solidarity with poor black folk – helping people to register to vote and organising teach-ins and in some cases in life threatening situations. The black civil rights movement then was a massive threat towards advancements in institutional change.

The marketing of the individual, life style choices, and the “me” generation of the last 35 years or so wasn’t just about moving consumer produce, it was also about smashing the solidarity achieved during the period when focus was firmly rooted in achieving institutional change. So much of the change achieved since the dislocation through identity politics, has been cultural change, OK in itself but change that can be to easily taken back. It is in institutional change the real power lies in protecting and advancing social aims and achievements and can only be won through vision, solidarity, movement building and responsible individualism.

The corporations who control states and economies, although in competition with each other have one thing in common, the collective aim of controlling what we think by keeping us in isolation. Identity politics forms part of that isolation process.

“Our people have made the mistake of confusing the methods with the objectives. As long as we agree on objectives, we should never fall out with each other just because we believe in different methods, or tactics, or strategy. We have to keep in mind at all times that we are not fighting for separation. We are fighting for recognition as free humans in this society.” Malcolm X