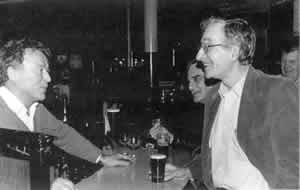 There are less and less places in the public arena where people can get together to discuss, chat, enjoy a coffee and have the freedom to shape the space and determine the debate – Environments that are not somehow influenced by commercial interests.

We are experiencing the transition of our public institutions, both inside and out, to a much narrower use than they are capable of. The supplanting of the local economy, meeting places to the barren planes of the “retail outlet”.

The ongoing surrender of our parks (autonomous space) into the hands of council sponsored entrepreneurs. And the open sociable debate, to the technologies of ink, cyber space and sound bites. The “Meeting in the town hall” is gradually being superseded by the “online debate” The public are consulted by documents, answered by machines. Live public debate is becoming a novelty of a past era.

The human voice is the most trusted, responsive, direct and accurate facility of communication we possess but we are forgetting how to use it. It is becoming subservient to the machines and technologies that filter, edit, transpose and deliver it. We are all kinds of people, with all kinds of things to offer and share. Our greatest weapon against the social isolation, we are being led towards, is the communication of our ideas in real time and importantly – in our own time.

To join the public debate we will need to reclaim and protect public space, we need to build and maintain the access to constructive discussion, concerning our communities, in order to organise and make our demands and to influence, public affairs at government level – in our favour.

The only way to preserve public space is to be in it. To use it and assert its importance in civil society – before a security guard tells us that we can’t