The above is not just about the eviction of the vulnerable. This is the neoliberal project ramping up and testing our resistance. This is a message being sent out to all of the vulnerable in our city and in our country. Neoliberalism flexing its muscle, in this particular area, to see how much we will take and what they can get and where they will go next.

It is not only about asylum, but to create fear in all of those in the grip off housing systems run by the psychopaths of business, 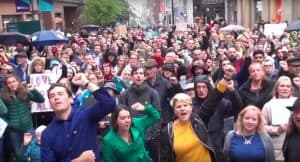 who should be nowhere near providing social housing. That’s the councils job. But then, it is not a problem of Serco, the council or the government. It is a problem for the people who “make Glasgow” and is a plague on all of our houses. Because if it isn’t Serco, or Carillion, it would be some other parasite. Some other group of business hyenas, nipping at the heals of our public services, pensions, wages, working conditions, environment, education and commons, for a way in, till there are no public services left. When their work is finished after exploiting and wringing dry the safety nets afforded to poor and destitute, then they will come for the middle classes. It needs to be remembered, that middle class aspirations are as meaningless to neoliberalism, as are the mass evictions of poor families. The fight back should not wait till it comes to the doors of out houses but should start at the front end of the wedge with those who suffer most.

My shame as a Glaswegian, is not caused by Serco. I know what Serco do and their ambitions. My shame lies in the fact that many in our city, who have the power to do otherwise, can stand back and watch these things unfold, then throw their hands up in disbelief, in feigned ignorance. It is the misconceived idea that people might think it will not affect or has nothing to do with them.

Asylum seekers are not weak, people. They are many courageous, strong and not faint of heart. The experience of their journey should tell us that. They are the kind of people whose experience we need on our side. They know what struggle means. They know how the system works, here and from where they have come from. That is why they need to be made weak, through racism, no right to work and scapegoated by Murdock’s press. And of course helped along by the stupidity and deniability of the polity and those who believe that they still have some power over corporations like Serco. This is something the various administrations gave up long ago when they agreed to the neoliberal projects terms. And why many fade into the background, richer, after their term of office.

Unlike short term party politics, neoliberalism, like rust never sleeps and if ignored continues to eat things away in the background throughout multi administrations, till eventually they collapse. Then we are left with the usual party games of “It wasn’t us it was them”. “He said she said” and on and on.

As the cliche goes. You can not keep doing the same thing over and over and expect something different to happen. We do not have any rights, whether you are an asylum seeker or are comfortable off with a job and house. Having and defending rights is an activity not a given. They do not come through protest, prophetic speech, bursts of energy, Facebook, voting, your council, government, or speaking truth to power. These things are helpful to a point, but are just a cop-out if not connected to organising.

Something different is beginning to happen. Many of our young folk are beginning to see through the overgrowth of fakery, the technological overkill that smothers thinking that has been such an influence so far on their lives. The idea that People do make change if they can become involved. And that becoming involved is about face to face communications.

Something different happens through diligent organising. Straight forward communication with those you find around us. Not just speaking to our friends, fellow activists, those you like, agree with, or those who have already been convinced. But to people who can expand and increase activism across the community. Struggle is continuous and there is a need to invest in building the institutions that can sustain the efforts of struggle against the Serco’s of any other name and their apologists. Proper organising, cooperation, and the ability to work together which many find difficult, is the elephant in the room.

The email list needs to get bigger every week as do the amount of people needing to be spoken to. Not just through email, but face to face. Community members need to be invested in personally, they need to be encouraged on board, they need to be encouraged to be the new community leaders. Those that live and work in the communities to be organised. Whoever they may be, locals, unemployed, homeless, asylum seekers and those nearest the destitution line. This has always been the case for organising, since the days of collectively protecting ourselves from the sabre tooth tiger. Today the predator is the warfare state.

One thing the right, the hate speechers, the racists and distributors of fake news understand is that. When ordinary people get organised they are less likely to be lied to. And when they do get organised they soon realise that they have more in common with asylum seekers and all others who suffer through the same generic persecution tactics, of divide and rule, and that the enemy is above us, not below us.

But how do ordinary people progress to something better through the constant and persistent brain scrambling media noise, of junk news, product placement and the advertising industry, rendering their brain only capable of thinking, survival?

How can they organise?

How does the young university trained activist and others, born with a keyboard in their hand, social media savvy, demonstration ready and a degree under their arm, understand about what is happening in a community? (remembering all communities are different, different needs.) How do they organise? The answer should be obvious if we juxtapose this and the last paragraph.

Many are realising. Facebook is the disease, not the cure. Which is why the far right like it. How can people organise around something that keeps moving and is designed to do the complete opposite to organisation?

2.2 billion people use Facebook and according to Siva Vaidhyanathan, author of Antisocial Media: How Facebook Disconnects Us and Undermines Democracy and is probably the worst place to start to understand things.
“Facebook is a terrible place to deliberate about the world. It’s a really effective place if you want to motivate people toward all sorts of ends, like getting out to a rally. But it’s terrible if you actually want to think and discuss and deliberate about the problems in the world. And what the world needs now more than anything are more opportunities to deliberate calmly and effectively and with real information. And Facebook is working completely against that goal.”

Some of us may know all of this. But where do ordinary working people stand? The need for re-humanising and face to face politics has never been greater. The politics of how we communicate ideas, come to decisions and act on them. The idea is not to just defend ourselves when the Serco’s of the world decide to attack. But to build the kind of understanding, awareness and resistance that will deny this kind of tyranny over us and to stop our governments continued reliance on their services. This kind of learning needs proper discussion, not something that passes on a Facebook feed.

We see all around us the efforts of individuals, unions, pressure groups and all kinds of activities. We are ready to go. But we need to go together. The recent action against Serco is heartening and smaller victories can lead to bigger ones, when we understand the important roll solidarity plays in them. We need to each join something, talk to people, enroll a neighbour, get out, show up. It is the only way we have win things before and the way to win things again, if we can build on victories. We do not need to be party reps to knock on doors, talk to folk and find out what they are thinking. This old idea seems to be reinventing itself and should be built upon, like Living Rent, and so on. And while we do this, we need to rethink alternatives to the out sourcing madness and rentier culture that has replaced good governance and the prospect of a decent life for ordinary people. People do make Glasgow. But they need to start believing it and acting accordingly.

The mad people are running out of ideas for containing us. The young are getting smarter. This could be the time

“It may be easier than we think.” Ralph Nader