Celtic Fans Against Shell Hell in Mayo
Just before kick off and during the half time interval of Saturday’s SPL encounter of Celtic and Inverness Calley Thistle a group of Celtic fans held up a paper mill declaring “Send Shell to Sea”.

The writing on the wall

The biggest loser of the Commonwealth games, says graffiti artist Banksy, is Melbourne’s street art scene – and London could be next for the whitewash

Watching Blackburn will never be the same

Connections – Sports greed and colonisation
What happened in Athens, converting the city to world cup splendor “…In the last push of round the clock preparation alone, 13 laborers were killed at the service of making Athens, in the words of one Olympic official, ‘habitable for a global audience’ “.

Bees United Appoint Greg Dyke as New Chairman
Greg Dyke has been appointed as non-executive Chairman of Brentford Football Club by its new owners, the supporters’ trust Bees United, who acquired the majority shareholding in the club today.

London Olympics 2012: corporate greed and privatisation
The decision as to which city would host the 2012 Olympic Games was made amidst such accusations of foul play and naked delight at the potential profits involved that one might have been forgiven for forgetting that this was supposed to be about a celebration of sporting endeavour and spirit.

Spectator Sports: What the Left Can Learn from Them

Sports fulfills emotional needs for people that those advocating social change can not afford to dismiss and that any mass social movement will have to satisfy if it is to succeed.

Bringing tradition back to football

Sport network
An Extraordinary General Meeting as now taken place and the foundations have now been laid for a club determined to bring back the tradition and heritage that many feel has been sucked out of Manchester United in recent seasons.

FC United given League go-ahead
The new football club set up by disillusioned Manchester United fans has been accepted into the North West Counties League for next season. FC United Website Fans are sick of this

What’s My Name, Fool?: Sports and Resistance in the United States If you’re young and you don’t know what this guy represents, if your a “not into sport” lefty, if you wonder what’s so -not brilliant – about the Olympic games, if you wonder what all the laissez-faire development in Glasgow is about..You could find this interesting.

Edge of Sport
Politics and the Playing Field: An interview with Dave Zirin by Mickey Z. 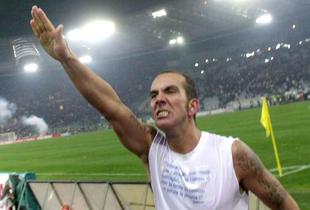 At the end of Thursday’s game, won 3-1 by Lazio with Di Canio among the scorers, the former England-based player ran underneath the Lazio supporters at the North End of the stadium to celebrate the victory

Sometimes we are reminded that the Olympics can serve as an international platform not only for flag waving and truck commercials, but also resistance.

We will not be wearing black armbands. The Italians will be and we respect their choice. We regret the death of the Italian journalist but it’s necessary also to think of the hundreds of Iraqis who have died…

You need to do something in the off season