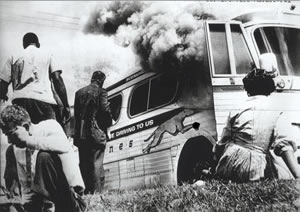 With so many corporations on the dole, banks being bailed out are we not in fact experiencing the collapse of capitalism, well neoliberalism. I seem to remember when the “commies’ were getting short shrift for failing miserably in Russia and capitalism winning out. I don’t remember anybody coming up with ideas about bailing communist institutions out. Keeping communism afloat with public money? Why should we do the same for the “capitalists”? Isn’t the market to decide who sinks or swims. Wasn’t privatisation the idea that it was more efficient and cheaper. Isn’t capitalism about gaining great wealth but also at the risk of loosing as well? Why has that part of the deal disappeared? Why have the poor to take on the failure of capitalism?

The neoliberal totalitarian state
“we were told we were entering a new era, of peace and prosperity and freedom – communism was defeated by capitalism and the free market. But just as they were tearing down surveillance cameras and totalitarian machinery in the eastern bloc, in the West the politicians and media were screaming for more and more authoritarian measures. In the UK as elsewhere there now is no right to silence, no more innocent until proven guilty, cameras monitoring every movement, and new laws which prevent collective gathering and protest. There has been no peace dividend, spending on defence is greater than at any time during the cold war, just as the world has become a much more dangerous place ” (From a reader in Guardian DMC, Australia)

During the US power struggle for president – when Obama was being accused of being a “socialist” Michael Moore the film maker observed. The word socialism has been mentioned more in this country over the last few weeks than it has been over the last hundred years. Maybe, he suggests folk will start looking up socialism in their dictionaries and start to say ‘Hey this sounds quite good, maybe we should try it'”

Is it not ironic that the most oppressive state towards black folk on the planet now has a black man leading it. Will we still be celebrating when Obama starts to roll back probably most of the promise he has made to middle class blacks as he settles in to power. While white people can imagine a fairer world with a black man at the helm the system can proceed practically unaltered for poor people black and white. To imagine otherwise is to ignore the history of imperialism and the history of the black civil rights movement that has struggled so long and so hard against it. To imagine a future where ordinary people can live without fear of hunger, homelessness, violence and the denial of a creative life, needs more than a cycle of perpetual short term power struggles to keep megalomaniacs in power, such as in the case of the US and UK.

Since the Spanish Revolution and before – the idea of people in control of there own futures is really what strikes terror into the minds of corporate power – not as they would have us believe – Protecting our own people from the threat of violence from others. Violence is a tool that they live happily with, that they use freely and with impunity. The use of propaganda and threat of violence is the only things that make corporations seem to be efficient and to screen the fact that their main objective is not free-trade, but wealth and control, through death, misery and waste.

We do not live in a bubble that is aloof from the misery of others, no mater what rhetoric we hide behind, whatever possessions we covet to dull the noise of our conscience. Our struggle for peace is continuous as is the tyranny of those who seek to destroy it. But we need to believe it can happen, things can change. We will not find what we are looking for in the pages or the networks of the propaganda systems created to dull our senses – fill us with fear and imply – it is useless to try something else.

Rather than celebrating a black man in the “Whitehouse” Shouldn’t we be inspired by the struggle of black Americans, ordinary people who have since the days of slavery challenged, and sacrificed so much and still to this day fight to give their kids even an ordinary life in a system that is stacked against them. Is this not inspiring? Is the challenge from South America by indigenous people against the most powerful state in the world to crush their “democratic” elections not inspiring.

Shouldn’t we be celebrating real democratic achievements, like Juan Evo Morales who has been the President of Bolivia since 2006 – and is the country’s first fully indigenous head of state in the 470 years since the Spanish Conquest. And Hugo Chávez who is the current President of Venezuela – and the leader of the Bolivarian Revolution – who promotes a political doctrine of participatory democracy, socialism and Latin American and Caribbean cooperation. Is this not what we should be celebrating?

In El Salvador, Mauricio Funes, of the former rebel FMLN party, has won the country’s presidential election, ending two decades of conservative rule. Funes won 51 percent of the vote to 49 percent for Rodrigo Avila of the ruling right-wing ARENA party. The FMLN was a coalition of rebel guerrillas who resisted the US-backed military government. More than 70,000 people died over an eighteen-year period, the overwhelming majority killed by military and paramilitary forces. Does this not inspire the idea that change is possible even in the most dire of circumstances?

Sounds like anarchy
This is anarchy – out of control – we will hear screaming from the networks of the “democratic” righteous. This of course is the real fear that strikes at the heart of the neoliberal bully – the fear of participation.

During McCarthyism and through the history of witch hunts carried out in the United States, over these years, communism and communists were brutally suppressed – but anarchists were killed – Sacco and Vanzetti et al. Anarchy, has always been much more dangerous to power structures. Not the right-wing kind of anarchy of fashion, chaos and nonsense – but the traditional anarchy of organisation, self-help, solidarity, mutual-aid, compassion and a vision of free people. This does not fit in any way shape or form to capitalist or neoliberal short term power struggles – What it does fit, is the basic needs of ordinary people, that they actually matter, that they can participate, that they can conduct there own affairs, without destroying all others.

The problem with anarchy is that it has some real answers to a lot of our problems. This is what makes anarchy so dangerous to the powerful – and therefore its need to be vilified. To understand anarchy, not in its pejorative meaning (disorder) but in the freedom to chose how to live without fear and in cooperation must have some resonance for people in the situation we (the west) are living under at the present time?

Maybe to paraphrase Michael Moore, people need to look it up, check it out and understand what anarchy really means, And they might say “Hey this sounds quite good – Maybe we should try it”.