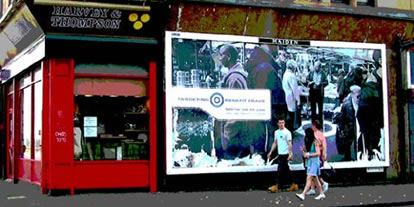 The process of colonizing the city by business interests is sold to the public in a language steeped in market jargon such as. “These projects are too exciting to miss. A challenge for Glasgow”. Jobs jobs jobs, And so on. Sure there are plenty of jobs, mostly at the lower end of the service industry. Will the “as-yet-unidentified national or international occupants” who are supposed to move in to these fantastic sites import their own workers? Who knows? Tackling social exclusion. How? By offering jobs serving and cleaning up after “yuppies and middle class professionals” for the minimum wage? What happens after the market goes bust and the technology moves the business elswhere (with our money. Boom dosen’t last forever and the sponge suckes up before it leaves) A yes, I suppose we can blame it all on dole fraud

These “significant and radical development proposals” (see Unidentified Occupants) must be disguised in public relations jargon in order to de politicize the process and to help keep those at the bottom of the financial and food chain ignorant. That is the public whose tax pays for every thing from advertising, business incentives, (tax avoidance) the sell off of prime public land and the ripping down of everything from schools to historic buildings and housing, to make way for the grand plan of sanitizing the city. Anything unrelated to private interests. It is useful for people to understand, question, and make themselves aware of the techniques and processes of market developers. Learning how to question the jargon to unravel the figures helps to deduce if there is any real benefit to the ordinary taxpayer in the package that is being sold to them in the regeneration of their city. The study of what is happening in the city centre can be a useful learning tool.

Why? Because the same techniques of business and public relations used to persuade and cajole in the retail, leisure and gentrification sector, are exactly the same techniques used in the manipulation of education, land reform, roads, employment, housing, health, as the population are further pushed down the road towards the privatizations of its public assets.

However I feel the more serious problem is the indifference of the public to these developments or the helplessness of the individual who is interested to do anything about it or let their opinions be heard. Which is why I have been moved to organize CITY STROLLS in order to engage dialogue, action, experiment, events, photography and, importantly the enjoyment of the city, at any level the participants wish to apply.