Solidarity is created through 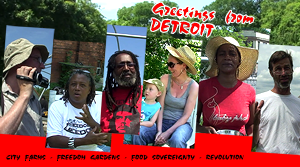 These are notes from a talk on LEGUP community garden, the opportunities of extending what happens in the garden and connecting with other community issues.

Somebody mentioned at a recent talk on the LEGUP garden that the conversation was more about politics than gardening. I think today growing our own food is becoming more of a political act.
Because what was once second nature in most communities, has now become a threat to the Monsanto’s of the world.
The right to feed oneself, food sovereignty, is becoming as big a concern to the masters of the universe, as much as the threat of the right to a democratic process. It is all about politics, but politics meaning how groups of people come together to discuss, things, come to agreements consensually and act on these decisions. This is not to be confused with party politics which is more to do with finding consensus to agendas that usually end up working against ordinary peoples interests. I think it is important to understand what is meant when we use the word politics.

Also what I want to talk about here are connections. It is all about connections. The more connections that can be connected the better, as far as I can see it. We can have all of this wonderful community stuff going on, and community is very important, but we also need more than that. Most of what we create in our communities is cultural change, what we really need to do to protect this, is make institutional change, i.e. challenge the power structures at the top. For this we need organised movements of people. And the way things are going at present with the occupy movement, we could be heading some ways towards that.

Another thing is, in Scotland our public and social space has been under attack way before the the austerity cut that are about to devastate communities was even mentioned. We really need to remember our civil rights were not a gift sent down from above. Our society struggled long and hard for these things and will need to do the same in protecting them.
We are involved in this struggle through our garden project, this kind of thing informs much of the work we do at LEGUP and the Farmhouse Trust. There is a few other issues I would like to talk about.

So then we also started thinking about the education process of building our own stuff, training people, internalising the work, creating a manifesto, looking at public ownership, the law and a vision of our aims. And how we could go about doing this.

In this procedure as well creating new avenues of thinking, we also realised we need to use the institutions and assets we already have and start to look at the history of how they got here.
Things like the :
*Common Good
and then
*Self determination
*Localisation
*Community connections
*Winter school Which is part the education project.
And most importantly
Using
*Common sense

We are really trying to create some old fashioned community, where people think and cared for each other a bit more and watched out for one another.

So what I call Community Permaculture
The same connections we make in the garden can help us to make connections elsewhere in our communities. We can use the same processes to connect and to look at different issues

Here is a few examples

In Scotland’s Common Good we have 500 years of collectivist history, laws, knowledge of land ownership. The common good is a powerful civic tool in understanding the rentier society, that is those who do nothing and think they own everything. Our projects are based on common good principals and in the reclaiming community assets.
—
By overcoming the abstraction of “land ownership” and the values of the rentier society which is drummed into us at school we can strengthen our self determination in land use that is in sympathy with the demands of those who live on it, rather than suffering the exploitation of those who claim to own it.

The idea that someone in New York or London for that matter can decide what happens in a local community is another abstraction from the days of empire. Whilst we can understand the self determination of Britain’s, former colonies in detaching themselves from the colonisers – we need to in turn detach our communities from the inverted colonisation by big business interests in all of our inner cities, villages and open spaces. Such as the colonisation of the east end of Glasgow for ironically the Commonwealth Games.

As we create localised strength we also need to make other community connections. We can’t do things on our own, we need movements of people with shared ideas, goals and overarching aims. The more we can understand how things are related and how the connections can be made to issues what concern us all the stronger our challenge will be in changing them.

Connections
If we look at the effects of land grab for instance, putting the Commonwealth Games site at one side for a minute. For those who control the land control the people. Two examples one in Glasgow one in London. Motorways like the eight lane that has recently opened in Glasgow, that has laid waste to and displaced so many communities over the last few decades as blighted land took the place of communities in preparation for eight lanes of pollution.
Motorways are not there to facilitate local folk going to work or to ease congestion or things like that. They are there simply to open land to developers. And you can guarantee the the land that is opened up is is owned or has been sold of by the council to business long before the motorway project gets under way – in Glasgow’s case in fact 30-40 years before.
Another case Andy Wightman I think it has mentioned one of these gross abuses of public interests to corporate interests. One of the last tube-lines to open in London, where places that were earmarked for stations saw masses of land sold off by London councils to private interests, rather than the land around new station being used to profit the communities who lived near, or on it. These things represent massive rip-offs of public resources that are happening all over the country. The more connections to these long time span capital projects and how they affect us that can be made and understood the more support communities will have against them, or at least to understand better why and how they will affect there communities.

Then there is work connections.
I am a carpenter, which is a kind of trade where you need to connect and communicate with other trades. As a carpenter you are usually on the job or project at the beginning and at the end. A plumber fixes pipes, the electrician wires, plasterers plaster, bricklayers bricklay. In the old days general foremen were always carpenters. Simply because every other trade connected with the carpenters work. So the carpenter had more of an understanding of process and practicalities across the field and insight into a whole range of skills. So many of the skills we exercise in employment can be of use in community affairs, but unless we make the connections we remain unaware that these skills can be adaptable to things outside of work. We all need to think a bit like carpenters.

And in the garden
I don’t garden much but I understand like Patrick Geddes, the famous town planner, how important the garden is in nurturing skills and education. Geddes understood the educational and connective values of the garden, which is why he was less concerned with the formal education of his children, but more interested in that they should become good gardeners.
In the garden we can find most of the elements of a civil society and a good life. The ability to find sustenance; awareness of the different elements that come together that create growth, judgment on these experiences, the weather, the geography, as well as the independence from the expensive processed poison of the supermarket. Respite from the mental poison of television, fresh air that induces the sleep that allows us to awaken bright, and think better, which helps to broaden our intellectual powers. We can not think when we are falling asleep in drudgery or unemployment. So the garden can open up these avenues of thought and create connections useful in other aspects of our lives.

And even in our analysis of these things we need to become what Grace Le Boggs, in Detroit calls movement intellectuals. Our intellectual work should be informed by our activities, rather than what we think we know.

Among the other opportunities we have in front of us in the growing community are opportunities to change the mind set that jobs are the answer to everything. To paraphrase George Monbiot, Any abomination can be performed in the name of creating jobs. It is not jobs at any cost we should be after it is a way of life where we can enjoy our work and see its relevance to how we want to live. Working class communities have suffered the roll back of their social gains over the last 40 years to feed the coffers of banks and, “to big to fail” multi nationals that have ruined our economy. We need to ask. How long can real jobs last under these conditions. And how long can we keep repeating the same failing process over and over again.

Sidney Checkland, used in his famous study of Glasgow, the analogy of the upas tree to describe the demise of the Upper Clyde Shipyards and could easily be shared by the Detroit experience and much of what is happening today. The upas tree with its overarching branches tends to halt the growth of all else that lies beneath it. So when the tree itself dies (shipyards) there is nothing left that can be taken up and developed because all efforts of the yards were towards profits and no concern for sustainable growth or social development of the city itself.

It’s this thing about connections again. At present the Glasgow city administrators are repeating the same upus tree, exercise of transforming the city into a giant conference, shopping and mega events-space in competition along with most other big UK cities. These schemes, no matter how many jobs they bring, relies on floating capital, which if recent developments are anything to go by can, like the shipyards can disappear at any moment.

It is timely in this climate that it is all the more important that localised industries are developed to counter the inevitable destruction of community infrastructure when capital decides to take flight. It is an imperative we attempt in our efforts in self sustainability that all these kind of connections become the norm. We need to clear the ground of the corporate upas trees that prevents any other kind of growth. But we also need to keep abreast of each others developments towards these aims through understanding the connections that will create these movements.

…movements are born of critical connections rather than critical mass. Intro:The Next American revolution