The algorithm can offer some facts and reviews but it can’t show you what it feels like to matter.
You can go on google and Facebook and find where places are. But you don’t get to talk to the people in these places. The internet can give simple information but it can not give the deeper knowledge of a place than actually going there can. The algorithm can offer facts and a review of different places, but it can not hear the rhythm or the feel of the folk who live there. END_OF_DOCUMENT_TOKEN_TO_BE_REPLACED

A 2023 project to research and publish:
A city hand book for the discerning citizen, traveller and reader.

The Glasgow user Manual – A peoples guid to the city

The Project, will be a one year long survey for setting up process and ideas for collecting information for a peoples guide to the city. A publication and website that will manage information and data for a long term portal to allow access to a wide range of city data, infrastructure and aspects in the public interest. This year long project will be the first phase in organising and creating the content for a publication with a work title of: The Glasgow user manual A peoples guide to the city. END_OF_DOCUMENT_TOKEN_TO_BE_REPLACED

Andy Wilson interviewed at East India Docks Greenock around 10 years ago. An incredible knowledge on public ownership under Scotland’s Common Good Fund. And Greenock harbour one of the worst infringements on Scotland’s common good law according to Andy Wightman, auther of The Poor Had No Lawyers: Who Owns Scotland and How They Got it. Andy passed away some years after the video was made. This film was mad by Simon Yuill as part of his research on the Common Good

“Glasgow Life” Still closing down working class facilities and culture while spending millions on tourist attractions. Turning the city into a generic shopping centre like all others and ignoring the cities uniqueness.

Burrell’s vanity project he got us to pay for. 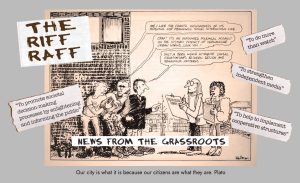