Why is the parks public consultation document not on the side of a bus?

No more so than in Glasgow, has a city befallen the all pervading culture of public relations. Every surface throughout our municipality, is loaded with the signs, images and the marketing philosophy of a vibrant, connected, city

We appear to be surrounded by experts, who deliver the message to the people, the way it is, up to date, on the spot, in your face, where and when it maters. 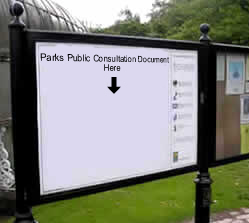 However his piercing”getting to the heart of the mater”, applied by Glasgow City Council, to profit and business interests, seems to wan somewhat, when important issues of public interest is concerned.

How come, with this publicity relations machine, that serves the above mentioned well and cost the tax payer plenty, seems to render itself redundant, when the tax payer needs it most.

Why when it comes to important issues such as; the future of our parks and green space, the council manage to bury the relevant documents so deep, that even when found; offer no reference, comment, views, debate that would help or encourage the public to form an considered opinion.

Why are the Glasgow public tripping over giant banners and posters concerning the “Glasgow Style” campaign, which is irrelevant, meaningless, embarrassing and costly to the average citizen. How much would it cost, compared to the above, to place a notice board in every park in glasgow outlining the councils proposals, ideas, and questions, concerning public green space?

I visited Glasgow’s peoples palace recently to find a massive area of the Glasgow Green, cordoned off by sheet metal hoarding’s. When I enquired I was informed a concert was to be held there the following Saturday. Given this was Saturday the work had been going on for a day or two and would go on after the event a day or two, cleaning up, grass damaged and so on. This means a large area of park will be taken up by a business event for two weeks. £79 for a two day ticket – with more events planned.

Not far up the road past the Peoples Palace, in the same park, next to the swing park (which is free) there is a fenced off fairground, which cost a £1 entrance plus the extortionate price of the rides.

Why is a business interest allowed to pitch an expensive fairground event on public property, charge an entrance fee to an area of public park, right next to a free public swing park? Ask any parent of smaller children, especially those on low income, what they think of this one.

The “West End Festival” and other amateur events have been commandeered by the carnival of business which is a precursor in privatising our parks. What used to be community events ar practically devoid of community apart from in name, and are being homoginised by the noise of fairground and hot dogs. You know longer go to an charity event in the park, to hold a bird of prey on your arm and get your picture taken for a £1 to impress your friends, or buy some home made cake (not that long ago I might add) You go to the charity event in the park to be drowned by noise, screaming weans, radio show broadcasts, expensive trash, and overpowered PA systems.

At present a skateboard park is being constructed in Kelvingrove park. Seemingly, according to the Glasgow “Evening Times” the skateboard park is being constructed after 20 years lobbying? By whom one wonders? There was another skateboard park in Kelvingrove park in the 70s, about a hundred yards away from where the new one is situated, (now filled in as flowerbeds). The reasons given for the closure of the old skatepark, were safety concerns think the closure was more to do with the residents being pissed-off by all the kids invading the area, rather than the safety issues. Boarders were coming in from miles around to use the facility. And let’s face it, on the safety issue, the council are a lot more safety conscious (paranoid) now, than they were then.

I am not against building skateboard parks per se, But I did like the do it yourself mix culture that went on at the flat skate park, which the new skateboard area is built over. Maybe it is just me being paranoid after reading the “park consultation document”. To many questions seeking consensus for mixing business interests with public interests. Skateboarding was amateur in the seventies, today its big business. Now the questions I am asking are. Did the parks department/council, out of kindness build a specialised site just to keep skateboarders happy, to the detriment of the kids who used the do-it-yourself space

Or could it be to do with pushing the Trojan horse of commerce through the doors of our parks in the innocuous pursuit of “doing things for children” ie replacing autonomous creative space to specialised interests space as part of a strategy to privatising public parks? I hope not, but I would be foolish not to read the signs that are common to privatisation tactics.

The above is not meant to poo poo everything that goes on in public parks, but to encourage what does go on – remains in the publics (shared) interest.

For this to happen we need to engage in the debate.