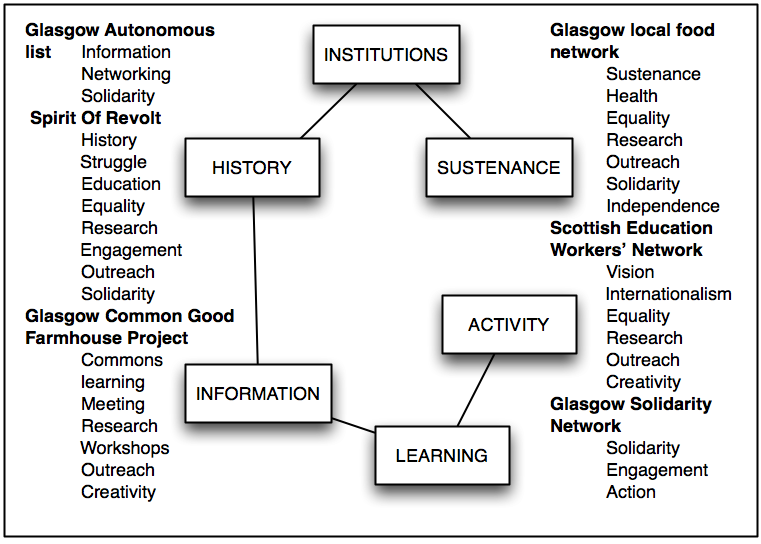 City strolls is ten years old, in that time I have watched projects, websites, ideas, sparks of inspiration disappear. I have worked with individuals groups projects that have come to nothing after much investment of time and effort. I find it worrying we do not have an independent space where folk can learn about what is happening around them. Where we can engage and share knowledge with young folk. There is no such space in the city. What we do have is a whole range of specialist groups and organisations that maybe needs to start thinking about their collective potential.

Has this started? I went to the Glasgow solidarity meeting the other week. The invite read: “This is an open meeting to introduce people to GSN and what we do, and to discuss how we can make our network open to people getting involved. We warmly invite everybody with an interest in cooperating with the Network or simply with an interest in what we do to come along and get involved in the conversation. We are even keen to hear about down-sides to how we are going about things so we can improve in the future.”

The meeting from the start took on the atmosphere of a social gathering, it was friendly, uptempo and focused in an open and inviting way. What I enjoyed about it and I think made it work was it was about parochial things, not in the pejorative sense but in the sense that it was dealing with things that were reachable, understandable and achievable by most people. So many times in the rush to change the world and tackle the problems of the universe the building blocks are ignored or pushed aside as the activist goes for the spectacular of critical mass and direct action.

The question what do corporations fear most the hordes in the street or strong self determined communities. The answer is obvious if we agree, we can not change things on our own. And that if we fail to engage in the everyday problems of the many, that is the folk we will need to make change happen there is no reason to think we will succeed. Many of the components of building solidarity are here. How we shape these components into a force for institutional change is maybe what 2014 should be about.

We city has recently established in the last few years: The Spirit of Revolt, an archive of the history of struggle, a local food network, a regular update list (Autonomous list), a solidarity network, an education workers network, the potential for an independent resource centre. And much more that needs to be mentioned. This will be a busy year with one thing and another. If ever there was a opportune time for the convergence of ideas and the rekindling of radical imagination in building working class institutions, towards movement building, it is now.  BACK