“Not to know what happened before one was born is always to be a child.” Cicero

About the need for grownups to take on some of the responsibility for what is going on around them. We can not leave the 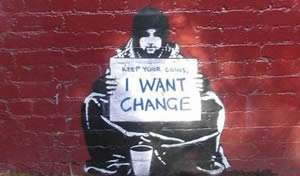 understanding of what is going on in the world to the education system.

Children are the flowers. We are the cultivators. We pass on the rich knowledge, the important nutrients, in our mentoring and guidance. Without these nutrients the aspirations of our young will continue to wither on the vine of capitalist indenture.

In our educational institutions we are not training thinkers we are training technicians. Ones that can do the job and get on with it without a question. That is the lucky ones. Young people are leaving university to jobs in coffee shops. Where do those they displace go? We are educating more students than we have ever done and giving them nothing to do.

Our education system has become one that trains for business and ill prepares students for the world of living. We fill class rooms in schools, colleges and universities with book learning and a promise, that sometime in the future, the learner might get a job. There are no jobs! What we need from our education systems is to train and encourage innovators to look at the work that is needing done. And most of that work should be done in the community not in classrooms. With real problems and real people. How can we expect to progress and challenge that which is destroying us when those in charge of the destruction have such an influence over our education system? We should be encouraging objectivity in education not subservience to career paths.

“Generally, the idea of ‘objectivity’ has to do with carrying out activities such as thinking and writing (activities that are subjective in the sense that they are done by subjects—that is, by humans, who have feelings, attributes, desires and biases) in a manner that is maximally faithful to the external objects with which those activities deal.  Objectivity in this sense, is most likely to be achieved when one’s conclusions are based on precise measurements, careful observations, and rigorously logical appraisals of relevant evidence—in short, on a maximally attentive and responsive engagement with the object being investigated” David Detmer

Corporations should have no place within our universities. They are the main reason why so many students feel useless when they leave university particularly if they can not fit into the jobs market nor can find a use for the specialised knowledge they have acquired. There was a time we sent our kids to university in order to find out about the world and become more knowledgeable active and involved citizens. Now our universities are mainly serving business interests. There was a time when business paid for specialised training of their workers, not the education system.

The cynicism that you can meet today as crackpot to have these kind of views on education is proof of how indoctrinated we have become in the ways of the market and how our success is measured only by how well we can survive within market forces. The possibility that our taxes could be directed towards looking at the fundamental flaws in an moribund economic system. That work could be made enjoyable rewarding and creative after what our young sacrifice to “education”. As we sit on the cusp of ecological extinction, at least disaster, we still believe in useless jobs that push us further towards our doom. While our young folk, with so much potential, are made to feel useless.

We need to turn back and see where we went off the rails to get back on them. We need to be doing the work/jobs of drawing us back from the cliff edge from all manner of disasters. Working for ourselves and the sake of humanity. Lemming do not have any prospects apart from following the rest to jump of a cliff. What has happened to our objectivity, when we need it most? Why are so many of our precious flowers withering through a lack of care and attention?

“The natural tendency of children is to solve problems, but we try to indoctrinate them with facts, which they are supposed to feed back, and then we fail them. And that’s child abuse. And you should never raise children that way. You should cultivate and encourage their natural tendencies to create solutions to the problems around them.” Grace Lee Boggs

“It is not good enough to do your community-development work only at the grass roots” He would tell us “So much of the grassroots are just at the level of spectator sport, television, cigarettes, drink and consumer culture. No you have got to get down to the taproots.” Alister Macintosh on Tom Forsyth

After 50 years in the continuous deterioration of our institutions we now live in the myth of a democratic society. At the same time there is so much knowledge in the world about what is happening, so much in terms of intelligent answers, directions we should be taking, alternatives to the hegemony of empire that is consuming us. You need to wonder the addiction that keeps us zombie-like and transfixed to its conditions.

We will protect anything that threatens our indenture to our jobs, no matter how miserable our jobs make us. Even the military industrial complex can be justified and protected as jobs so long as we steer clear of understanding the misery it causes for great swathes of humanity and the billions it removes from the economy in private profits and fraud that could be making life pleasant for so many. Our cynicism towards the idea that life could be more pleasant for folk is only matched by the depth of propaganda that assures us that austerity will need to last forever.

Without even taking Trump into the equation the situation is bad enough. Look at the people who are determining our future. What on earth do ordinary people have in common with them? How common is the house of commons and who’s peers are they, the peers of the rich? Everything that comes out of their mouths is to tell us we are to blame; we have to pay, we have to change, we have to move on? Yet they themselves have not moved an inch for three hundred years in their policy of protecting their own interests at all costs. The wealth of our country was built on empire. Our history is we conquered and colonised nations, robbed them of their natural resources and at present we are still blowing such places up along with our cousins of death in the US administration. Then we are convinced to persecute those fleeing from our carnage arriving on our shores, that they are here to steal our jobs! What happened to class solidarity? Why do so many feel that they have to protect the rich  and persecute their own class?

The difference between ourselves and the average asylum seeker is that they have done something about there situation. They have taken the steps any normal human being in their position would take. Why we need to ask are we so insulated on our island from cause and effect. Why does the BBC talk about the asylum problem and ignore the millions in arms and bombs we sell and use that have helped to create it? Why do so many not want to talk about, or understand this. Probably because if frightens us. Probably because we do not want to rub shoulders with those who suffer from our ignorance. We have more in common with those who suffer from the crimes of our master warlords and we should seek solidarity with them against the source of most of our collective problems. Serving US imperialism through our puppet state.

We will not inconvenience ourselves enough to survive but rather entertain ourselves to death. The common dream was about integrity, hard work discretion modesty discipline and how we define ourselves. These things have been replaced by bling, narcism, disconnection, the addiction to the unattainable. The hamster wheel of sameness.

Trump was right when he says “It’s not about me, it’s about you.” Trump didn’t start the melt down of the collective conscience, or the deconstruction of democracy. These things have been happening for a long time. We should be thankful for his wake up call of exposing just how bad things have got.

While the responsibility of the National Health Board and the Department of Work and Pensions, is passed to local authorities, then passed to arms length organisations, then sold in turn to make more profit off those who need these services most. In the U.K. we have in the last financial year exported a record breaking sum of six hundred and eighty billion pounds, in goods and services to the rest of the world. Yet the ruling parties keep telling us we have no money to run our own health and education services. And while the department of work and pensions withdraws support of those unable to work and in a country with a declining population has decided to limit the families of the poor to two children. And where a prominent politician offers a way out of poverty as suicide. That is not about the profiteers it is about ourselves and the many being brainwashed into believing that our situation is hopeless and there is nothing we can do.

Today the UK government has announced the highest Budget Surplus in 18 years, further highlighting the truth of Austerity as Ideological policy and not driven by a “Lack of Money” in the nations finances!

We have contained in our rich cultural tap-roots the evidence that this has always been the case. We were once world renowned in the quality of our education system in a time when there truly was no money. The vision of these tap roots have been obscured by a dysfunctional neoliberal process hell bent on instant gratification, profiteering, lying and no foresight of the future apart from their own. We need to re-connect to the tap roots of our heritage culture and power to get us through the isolation of the fragmented gig economy, And through this re-connection we might find the answer to replacing the institutions that once gave us a sense of power agency and community. And an understanding of who the real fraudsters are. We were once proud of our public institutions that cared for the old, the weak and the poor. When did so many start to blame them for their poverty, while unquestioningly feeding the bloated liars in Westminster and elsewhere with our taxes?