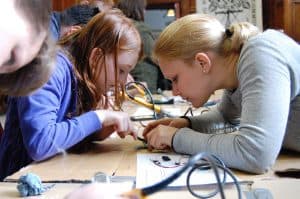 There will be nothing in the celebrations of RAF history about:
dropping mustard bombs and phosgene in the first world war.
About the bombing of Dresden in the second world war.
About the bombing of Iraq under false pretenses.
About bombing the Balkans under the guise of humanitarian relief.
And countless other atrocities our country, through our Royal Air Force command, has colluded in, with other Western warmongers

So, shortly after the promise of no more arms fairs in Glasgow. The Glasgow Science Centre, will have Meet members of the Royal Air Force in an interactive STEM/Techno Zone and learn more about “how we’re creating the next generation Air Force.”

Why is there never enough money to celebrate a hundred years of social and technological development that actually has the possibility to enhance peoples lives, but plenty to celebrate what we “force” on others, with country wide propaganda events to entice our kids with lethal toys. What’s the RAF doing in the Glasgow Science Centre, not I would guess reminding kids of the very real horror of war that can not be expressed on a plasma screen directing missiles to targets?

If this is the Science Centres mission, Getting technology and understanding into communities, schools and community groups for the purpose of social development should be part of that. Another should be the use and effects of technology particularly around arms. Just defining science as neutral might be factual but it is a cop-out. And it is a cop-out to educate our children with the toys and technologies of the arms race without teaching along side it the cause and effect of the use of such technologies. Like. How they are used to drop bombs, usually illegally, many people suffer, many people die.

We need a wider debate on technology and a better understanding of what our taxes are supporting. Because the war machine is sucking up funding that that should be available to the developers the innovators particularly among our young who will suffer most from the disasters of the old man’s war machine. So what is to be done? Is the above mentioned STEM the answer on its own? This abbreviation has no relevance to the impact or misuse of science, technology, engineering or mathematics.

Here is an idea. We need STEAM in the STEM (Radical Imagination Project)

Here STEAM culture is a bit different from raw STEM, an emphasis needs to be based on the functions and uses of technology not only the technology itself.

The arts bias created in our current project for instance (chose your own, democracy, agency, politics and so on) is to encourage imagineers as well as engineers. Creativity based on human morals rather than just raw statistics. Because the same technology that is capable of enhancing our lives, is also capable of destroying us. A dichotomy that should be a basis for any scientific study in schools or anywhere else.

The difference being we need to understand the use of technology through creativity not just by raw fact and rote learning alone.

The raw facts being for instance: The atomic weight of a particular atom being made up of the weight of its protons, neutrons and electrons, should not only be worked out for the purposes of calculating the yield of a weapon.

But when we understand why these calculations are not only important to arms manufacturers, but also to medical science we are better informed of their uses. And the science bias in a civilised society should, you would think be towards saving lives rather than destroying them.

Cynically we could suggest the only reason to teach kids about strong and weak nuclear forces would be for the intent of insuring that we have a steady stream of weapons developers. Rather than departments of nuclear medicine at the local hospital (Where there is a shortage of doctors in these departments).

And technologies that are sometimes blatantly avoided are those like liquid fuel reactors,(LFR) and such like, because the benefits are generally humanitarian and less commercially profitable. For instance. Why should we be shackled to a debt when energy suppliers bolt solar panels to our roof. People should be able to enjoy the direct benefit of the free energy of solar technology without business converting it to, profit for business and debt for the tenant or home owner. Solar energy should not be about blue sky thinking and profiteering but directed towards answering the pragmatic questions around fuel poverty and the environmental impact.

Science education it would seem to a great extent is only focused on the commercial benefits of the arms race. We can use depleted uranium in bullets bombs and missiles but also in medical equipment and chemo therapy. Who makes these decisions of death over life and why the bias on arms when cancer patients are dying on waiting lists who could be saved by the same technology?

These are the problems we should be focused on and what most folk care about, both here and in the countries that are bomb with our sophisticated technology. We are human beings not cannon fodder for the arms-race-rich. The problems are nothing to do with technology, but with those who control it. And technology will never solve that problem without the democratic will, ideas and people to direct it towards better things.

Only human beings can decide what technology is used for. Most of us want it used for good thing, but think it has nothing to do with them. Half an hour with “The Common Good Awareness” science and tech coach could convince them, that this does not need to be the case.

The need to reclaim technology
https://youtu.be/_aRdP0g4C_A